On the 27th of June – today – the Hungarian festival season starts officially with the 25th annual Telekom VOLT Festival in Sopron, Hungary. Among the artists performing on its stages, we find veterans like Fatboy Slim, Linking Park, along with bands like Imagine Dragons, Pendulum, Lost Frequencies, Knife Party, and many others. This year marks the 25th anniversary for two of Hungary’s biggest and most important music festivals – Sziget and VOLT. Also, this year comes with sad news for many festivalgoers – Gerendai Károly, the founder and chief organizer of the festivals has previously announced that he is stepping down as an organizer, preferring to focus on other projects.

Gerendai on leaving space for the young

Gerendai stepping down as chief organizer means the end of an era for the Hungarian festival scene. And he didn’t take this decision due to the change in the festival’s ownership – in an interview (Hungarian), Gerendai revealed that he decided to step back long before. What pushed him to take this decision was, at least in part, his loss of motivation. “I was a little tired, and I put every bit of ideas, innovation, and enthusiasm I could into this project”, he told nullahategy.hu. “And if I don’t feel the craving to go to work in the morning and I don’t enjoy my work, I could become an obstacle in front of development”. 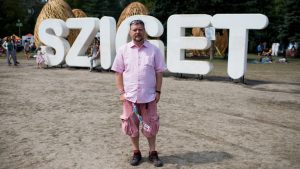 Besides, he said, the world has changed a lot. When the festival started, he was just another guy in his twenties, one of many. “Today, I live a completely different life from our target audience, so I decided it was time to leave space for our young coworkers”, he said.

Of statistics and feeling

When asked about the information, studies, and statistics the organizers rely on when trying to find out what the tastes of the attendees are like, Gerendai said that back in the day, there was no need for such data. He was one with the target audience and didn’t need to rely on statistics to know what bands to invite. Today, in turn, he considers that the decisions on which artists to invite have to be taken by those who actually listen to their music – he has revealed that, when it comes to today’s performers, he is not as knowledgeable as he should be.

“If you look at a performer’s views on YouTube and follower count on Facebook, you can form an idea of how big the interest in his or her live performance would be. I’m not on Facebook, though, and I don’t even have my own email address, so I’m drifting further away from our target audience,” he revealed. “I can read the statistics and follow the trends, I might even be able to interpret them, but this is not the same as relying on your gut feeling”.

Of prices and events

When asked about whether the constant rise of ticket prices endanger the future of Sziget, Gerendai confirmed that there is a slight possibility. The prices asked for by the top performers kept growing in the last few years mostly because the many competitive events outbidding each other. The trending performers can make use of this tendency and raise their prices year after year. This is dangerous, as the liquidity of the attendees is not growing in tune with the prices. At one point, you reach a price level where attendees can’t afford to come anymore, which can lead to the festival’s demise.

This could lead to the market’s self-regulation – when festivals can’t produce these high prices anymore, and they go bankrupt, there won’t be so much competition and outbidding on the market. It will be then when the prices will return to the normal level.

This year’s innovation at Sziget Festival is the Sziget25 Cruisin, a party boat slash sightseeing tour that you can book a ticket to at the price of 24 EUR (until Friday night). More details about the lineup of the boat and its schedule can be found here. 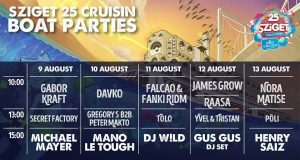