Skip to content
You are here
Home > 2014 line up > Names arriving soon, schedule in April

Good news from the Sziget organizers, according to some answers the admin of the Sziget Festival Official Facebook page.

One of the fans has asked if he could get a new name as a birthday present. Part of the answer was “Names are arriving soon, very soon, we promise”, as you can see in the screenshot below. 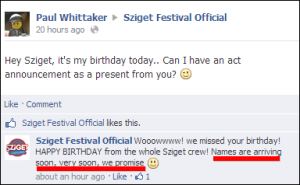 That’s not everything, though. Another fan is asking when the schedule would be released, as he can’t stay for all of Sziget 2014.

The answer is that we will all get to know the schedule at the end of April, as you can see below. 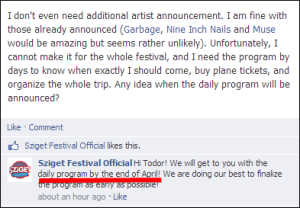 All good news, isn’t it?