Interpol has announced a series of live appearances for this August and September, and thus confirmed their participation at the 2017 Sziget Festival. The band will spend most of August and part of September playing on European stages. They start their tour in Prague on the 9th, participating at events like Summer Well in Romania, AMA in Italy, DCode in Spain, and Sziget in Hungary.

Update: another self-confirmed artist: Leningrad will also play at Sziget 2017, also on the 15th, at 8PM.

The band currently consisting of Paul Banks, Daniel Kessler, and Sam Fogarino is working on new material to be released next year.

Interpol was formed in 1997 by current members Paul Banks (vocals, rhythm guitar), and Daniel Kessler (lead guitar, vocals), along with Carlos Dengler (bass guitar, keyboards) and Greg Drudy (drums, percussion). The band self-released several EPs in the coming years, then signed with the label Matador Records in 2001. Their first release under the new label was a self-titled EP, followed by the release of their first album, “Turn on the Bright Lights”,  in 2002.

Update: The band will play at the A38 stage again, just like in their previous appearances. 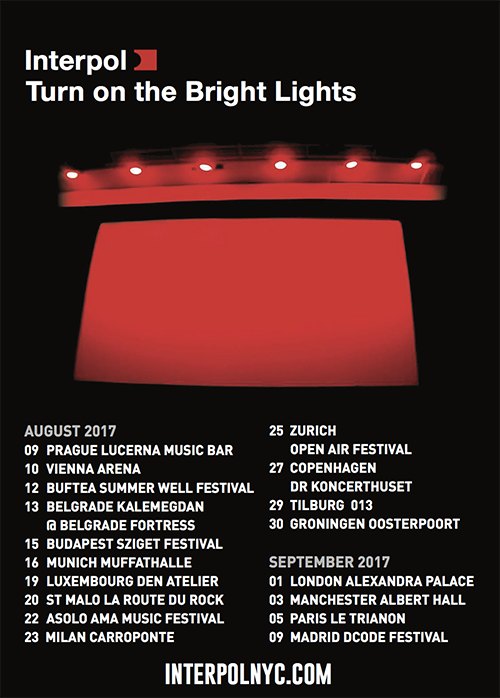 (nice catch pepperrabbit, thanks for the tip)

Leningrad. Thanks for all the tips, folks!