And now, the moment we’ve all been waiting for: Sziget finally announced the first artists and bands to perform at the 25th edition of the festival, Sziget 2017. The announcement was anticipated by so many that when it finally got published, the sheer number of visitors apparently took down the Sziget websites: 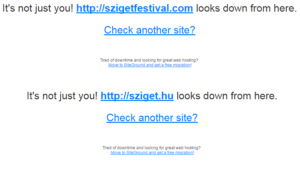 Hopefully, this is not a bad omen for the upcoming event.

As usual, there was a lot of speculation – mostly based on the lineups announced by other festivals, and the tour dates announced by the artists or the bands – about who will be the names supposed to draw us to the festival’s anniversary edition next year.

The first edition of Sziget (called Diáksziget, or Student Island, at the time) was a small-scale event, with a bit over 40,000 attendees and featuring local artists only. By last year, in turn, its attendance has grown more than tenfold, and it features artists and bands from virtually every corner of the globe, covering most musical styles (although its recent shift of focus toward EDM seems a bit too much for many). And Sziget 2017 is still ahead of us, ready to break even more records.

As usual, there’s no word on who will play where, except for Dimitri Vegas & Like Mike – the end show always takes place on the Main Stage. Most freshly announced acts are electronic, with a handful of exceptions (Bad Religion is one of the legendary names of the punk rock genre, after all). Hopefully, the rest of the lineup will be more diverse, offering everyone something to be excited about. It’s the 25th Sziget, after all, and as such, it should be a truly spectacular one.

PS: The Sziget websites are back up.