Skip to content
You are here
Home > 2016 lineup > Roundup: Rammstein and other bands in Europe During Sziget 2016

Another week has passed without any new names announced by Sziget 2016. There is a lot of speculation about Radiohead possibly making it to the festival, but there’s nothing confirmed just yet. However, there is still a lot of time left until the final lineup of the festival to be announced. Until then, let’s see a few bands, like Rammstein and Nightwish, that are in Europe close to the dates of the festival, which could still be announced to play at Sziget 2016.

Nightwish has been to Sziget twice before, in 2001 and 2002. The band has already announced a series of festival gigs for this year, including Rock in Reiver in May, Greenfield Festival in June and Bråvalla Festival in July. For August, they only have two gigs announced: Himos Park in Jämsä (Finland) on the 20th of August, and CZAD Festival in Poland (between 25-28 August).

Rammstein is well known for its amazing live performances – and such a name would be a great attraction for this year’s Sziget. And they might make it – their live schedule contains a series of festival gigs, including Rock Werchter, Gods Of Metal in Monza or the Paris and Donington editions of Download.

For August, Rammstein has only one gig announced – Highfield in Grosspoesna (Germany) between the 19th and 21st of August. Apparently they are free during at least a few days of Sziget 2016.

He needs no introduction – Tiësto is perhaps the best known DJ of our times. And he will be in Europe in August – Untold Festival (4-8 August) has announced him as one of its headliners.

Another popular act of our days, the Japanese-American DJ has announced a series of tour dates in Europe for the summer. For August, he has announced a gig for Chiemsee Summer (Ubersee, Germany – August 27th), so he is apparently (still) free during Sziget 2016.

RHCP will be in Europe starting this June, playing at events like Rock am Ring, Roskilde Festival and Rock Werchter. For August, they only have one gig announced – the Reading Leeds Festival, between the 26th and the 27th.

The South African band is in Europe this summer, but they have no tour dates announced after June (they’ll be at the We Are Electric in Eindhoven).

And the list of bands could go on forever…

…but I’ll just stop speculating. We are still early in the year, and lots of bands have yet to announce their upcoming gigs. So, stay tuned!

Reading/Leeds has just announced its second wave of acts. The list contains names like Foals, Disclosure, Jack Ü, Imagine Dragons, Two Door Cinema Club, Fetty Wap, Nothing But Thieves, Crystal Castles, Parkway Drive, The Internet, Hannah Wants and Oliver Heldens. Some of these artists might also show up in the 2016 Sziget lineup! 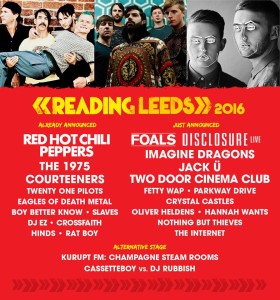 (Thanks @Ambassadeur for the tip!)

182 thoughts on “Roundup: Rammstein and other bands in Europe During Sziget 2016”