UPDATE: The Island of Freedom, Sziget Beach and Color Party, as well as the End Show are detailed, respectively, here, here and here.

UPDATE: another post details the press conference today – apart from Sziget Eye being bigger, it must be mentioned that swimming will be possible this year.

UPDATE: As announced on the official Facebook page, David Guetta will be part of Sziget’s End Show, a “final act of the one week of fun. So, on Sunday, on the Main Stage, Sziget will end with a very exciting show full of fireworks, pyrotechnics, laser shows and other special effects. The music during the show will be played by one of the best-known DJ-producers nowadays, David Guetta.”

This means David Guetta will play on August 11.

The same source includes information on the visual part of Sziget 2013, which will play a very important role in this year’s festival, and the new venues coming with it, Disco Park and Freak Park.

The name is listed along with other artists names that are already confirmed for this year, like Blur or Die Arzte, as you can see in the screenshot. 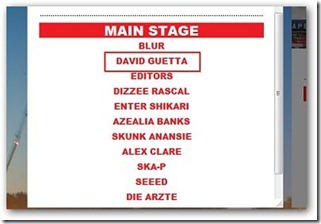 Since David Guetta is on tour this summer, this can certainly be treated like a confirmation.

We’re wondering if it’s part of a bigger list of artists to be announced in the next few days.