The newest big name to be confirmed for the Sziget 2013 line up is, it would seem, Motörhead.

A few of our friends have seen a Sziget 2013 date announced on the Motörhead official website, which would have made it a self-confirmation, but that date has been pulled off before we could take a screenshot.

The date was August 5 for Lemmy & the gang at Sziget Festival, and it also appears in a list of tour dates that a user called Snaggletooth has posted on the forums on the official website – you’ll need to be registered in order to see the thread, but you can also see a screenshot below. 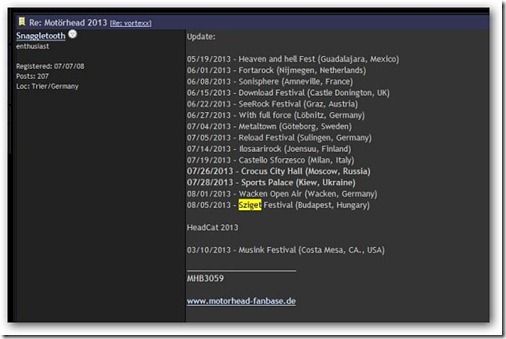 He has also posted it on his website, motorhead-fanbase.de, along with other tour dates.

This is obviously very good news for metal fans going to Sziget and we hope to see it officially confirmed soon enough.