The Sziget 2014 lineup poll results are here for you. We’re posting them a bit later than usual, as Sziget 2014 is in full swing already.

So, as you take a little break from partying, here’s what you guys thought about the Sziget 2014 lineup.

By the looks of it, it’s no wonder the tickets have sold so well this year.

The two very negative options, Bad and Very bad, have received just 8.65% and, respectively, 2.99% of the votes, as you can see in the image below. 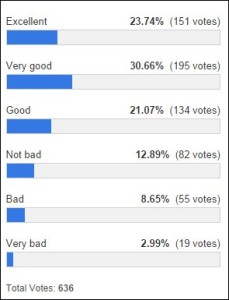